She finished her Breed Championship on April 5, 2003, culminating with three, back-to-back Best of Breed placements.  She has incredible reach and drive; watching her move around the ring sends shivers down your spine.

Tzeitel had a steady field career as a Puppy and Derby, but we didn't do any serious 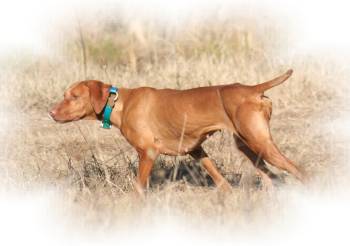 training with her until she reached 3 years old, as we felt she was not ready for it until then.  When the time was right, she let us know.  The summer of 2004, she was sent to our pro trainer, Ray Dohse of Eshod Farms, for whoa training and retrieve training.  Fall of 2004 was her debut as a "broke" gundog.

Spring of 2005 gave us a finished Amateur Field Champion.  Tzeitel finished her Field Championship with a 4-point major in January, 2006, just 14 months after her first placement in a Gun Dog stake.  During her "run for the roses", she had 14 placements in Gun Dog stakes (8 Open, 6 Amateur), defeated 240 dogs, and like any modern, working mother, still had time to raise some well-socialized children (see Fancy's Page , Zeko's Page, & Clay's Page).  To the best of our knowledge, Tzeitel is the youngest Vizsla Bitch to earn a Dual Championship since 1996.

Tzeitel's first litter (June 2005) produced 6 puppies (3 male/3 female).  Three of these are in performance and/or show homes.  To date, they have accomplished the following with limited showing:

Tzeitel's April 08 litter by FC O Mega gave us a phenomenal litter with tremendous potential in both the field and show ring.

In August, 2008, we decided to dust Tzeitel off and show her in UKC just for fun.  In one 6-show weekend, we were greatly rewarded with 3 Group 2's, a Group 3 and Group 4, and ultimately a UKC Champion.  Our 7-year old girl still has what it takes to knock their socks off, and her quality simply can't be denied no matter who's logo is on the ribbons.